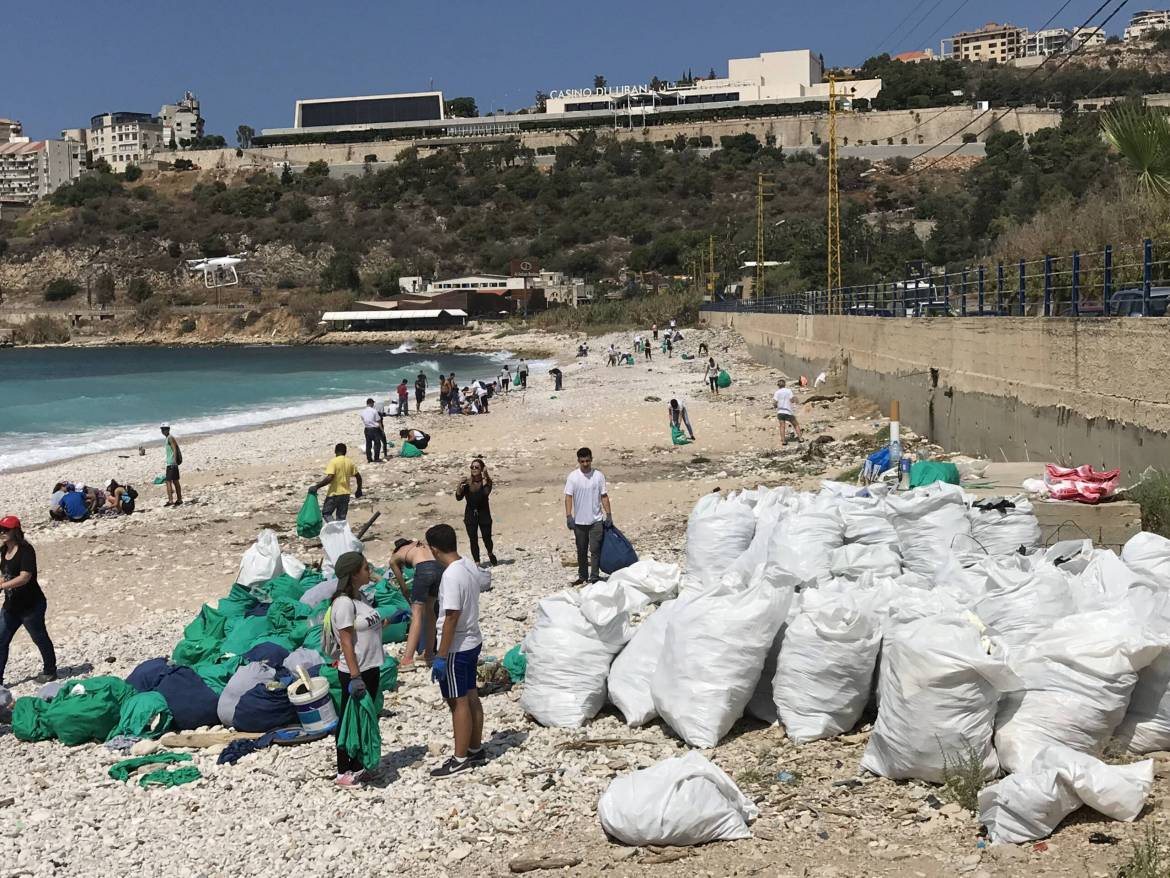 World Cleanup Day In Lebanon: The Aftermath And Lessons To Be Learned

We recently spoke to you about the massive international initiative World Cleanup Day. This global social action program, which is aimed at combating the global solid waste and marine debris problem, took place on September 15, you can find our article here.  This year more than 13 million people from 155 countries and regions joined forces to collect man-made non-degradable trash, according to World Cleanup Day headquarters.  Pretty impressive, huh? Well, Lebanon too made its mark and for a small country we are proud to say that it’s not too shabby: an estimated over 3,500 volunteers came out to clean more than 30 locations across the country. In fact it was the biggest mass cleanup operation recorded in Lebanon’s history!

The Wellness Project spoke to few key players and did some research to get an inside view of what went on and how things evolved over the one year period leading up to the event. Most of the stories are favourable showing how the Lebanese came together in solidarity and goodwill to volunteer in planning the event and executing the trash pick up.  Unfortunately, some stories involved unnecessary politics and big egos getting in the way. We thought to reflect on the various challenges that took place while also noting the best practices and achievements from Lebanon’s World Cleanup Day.

No Government Funding and Politics at Play! One has to appreciate the fact that organizing this event- awareness raising, logistics and resources – came mostly from volunteers. “We all had to juggle our actual jobs and other responsibilities along with the actual planning of the event for almost a year,” explains Aline Chirinian, JCI Beirut President and World Cleanup Day Country Leader of Lebanon.  Putting together World Cleanup Day was no easy feat considering that JCI Lebanon did not get any financial support from the government, no grants or sponsors to start with. They also didn’t do any fundraising beforehand. “Initially, we thought of doing six locations across Lebanon, but in the end they turned out to be over 30! This is thanks to various partners and sponsors that came on board mainly towards the end, say two weeks before,” said Chirinian.

Also help from municipalities varied greatly from one to another.  Kevin Mattar, who heads the Sustainable Club (a nationwide student association that originated in ALBA – Lebanese Academy of Fine Arts) dealt with many of them to help organize this event, but he was especially impressed with one in particular: “Damour Municipality was outstanding.  They were generous and cooperative with us offering food, water and anything else we needed at the site.”

In typical Lebanese style, with everything you attempt to resolve (including the ongoing national garbage crisis), there is a high probability for it to get politicized.  When JCI approached some local NGOs to inform them about this event, in order to get them on board, the reaction was mixed. “One or two said categorically ‘no’ they won’t join, as they preferred to do their own event for World Cleanup Day and get all the credit themselves,” said Mattar.  These NGOs who refused to join JCI began to work separately, but as time progressed they found themselves more and more involved with JCI as they operated in the same circles, and they ended up working together and helping each other. “Of course, other NGOs worked on clean ups individually as well.  In the end, it really didn’t matter as long as everyone participated in his or her own way, even if they did it autonomously,” added Chirinian. Another challenge was to conduct this event with a zero waste policy. The cleanup in Maamaltein, spearheaded by Sustainable Lebanon, Sustainable Club with the help of others, including Drop off Tabarja and Zero Waste Act for waste pick up, managed quite well according to Mattar.  They ingeniously used cloth bags (made from recycled old school uniforms) for volunteers to use for picking up waste, before emptying them into the large white plastic recyclable waste bags. They also got a local water company to provide them with glass bottles (instead of plastic) for the 250 volunteers to drink from. In addition, they managed to fill up additional glass jugs with electrolyzed reduced, hydrogen-rich Kangen drinking water, as well as  PH2.5 in spray bottles for disinfecting (for more info.) Other locations resorted to plastic bags throughout or served drinking water in plastic bottles, which unfortunately defeats the purpose of this whole exercise!  However, on a positive note, this is another lesson to be learned (so as not to be repeated) for next time.  Most of the sites also used locally made recyclable and reusable gloves, which were robust (for handling sharp materials) and easy to put on.  “Trying to do things with a zero waste policy was difficult to manage and each clean up spot had different resources and volunteers,” said Chirinian. “However, in all the 30 plus locations, the collected trash was sent to be sorted and recycled.” In other words, none of the collected trash was dumped elsewhere or burned – that is a feat in itself!

Although the event was being prepared by JCI starting back in November 2017, many of the people that were approached did not galvanize into action until much later on. “We began speaking to people about a year ago but most of them were not that excited or responsive at first, “ admits Chirinian.  It was only in the last few weeks leading up to September 15 that most of the partners and external volunteers became involved or offered their services. This was positive development for the organizers, but equally stressful having to navigate so many new partners at the last minute.

Some of this was thanks to some advertising, but mainly due to word of mouth and social media according to Mattar, who himself was actively involved.  “I approached every association, group and NGO possible to get them to join,” added Mattar. “The Scouts, Lebanon’s LGBT community, Rotaract Clubs of Lebanon, Amideast, Ouzville, and dozens more groups I spoke to and tried to get them on board.” UNIC and Aleb Keserwain served as the main media partner for this event and helped with TV commercials, billboards and interviews on several local stations.

However, some of the communication got distorted along the way according to Chirinian: “Different stations reported about the event in different ways, some claimed the EU organized the event, others claimed it was a political party and so on. At first, it was a bit discouraging.” Some of the news coverage also showed one site more than the others. The three Beirut sites (Ramlet El Bayda, Ain Mreisseh, Rawshe), which were handled by Live Love Beirut and JCI, seemed to get most of the media coverage after the event, but Chirinian is not fazed by that. “Beirut is a location that is more easily accessed by most reporters so it is not about biased reporting but more to do with convenience,” she points out.  “But pictures of all locations are available online for everyone to see.” To see more pictures click here. JCI are also working on an official video of this event, which will be released soon. For Chirinian, Mattar and plenty of other organizers and volunteers there were many lessons to be learned from this initiative, and no doubt the next one will be even better. If anything, this massive cleanup effort did raise awareness about how we as consumers are also very much responsible for our own trash (we can’t only blame policy makers and wait for them to sort the problem). To see so much trash strewn about recklessly on a beautiful beachfront or in an open field anywhere is disheartening. Volunteers are seeing, firsthand, how much of the garbage is superfluous items (mainly single-use plastic ) that can be avoided and replaced altogether with reusable non-toxic alternatives. Profound change is on the horizon and the more we spread the word and lead by example, the faster we can fix the problem.