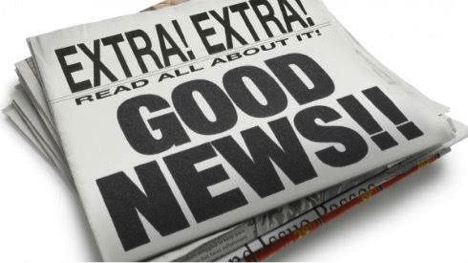 Previous item 7 Things to Do In Lebanon... Next item Finding Your Mindfulness...

Positive New Stories From July To Brighten Your Week (Part 1)

There seems to be a rather solid consensus that July has been an exceptionally unpleasant month. Some blame it on astrological alignments and others on the searing heat. We could postulate that passing the mid-point of the year runs everyone afoul as they unconsciously realize they haven’t done all those precious resolutions they started the year with. Whatever the cause (or perhaps just coincidence), people have seemed to be more irritable and emotional, and there has been a general sense of deep ennui. And whether there is actually more bad news than usual, or the bad moods have made the regular news seem even worse, is rather irrelevant. What matters is July’s environmental and social catastrophes have been a bit more crushing to the spirit, if I may say so myself. As such, we at The Wellness Project think we could all use some positive, inspiring stories today. In fact, we’ve got 6 for you!

But before we begin, a disclaimer: Yes, we realize some of these stories can have a critical lens dropped on them, some contradiction or hypocrisy drawn from them or even just some general, “but we still have this and this and that pile of #&%@ to deal with so what does it help” comment launched at them. It does help. Let that cheer shine on you. Good news! Yay!

1. Lebanese Weed Might Get It’s Day In The Sun If you’re in Lebanon, it’s unlikely that this piece of news has escaped your attention. The Lebanese parliament is pondering jumping on the ‘let’s grow pot for medical purposes’ train. Which, let’s face it, considering our lengthy and unrecognized expertise in the matter, would be about bloody time! As Reuters states:

“Although growing the plant is illegal in Lebanon, powerful landowners nevertheless have for decades openly grown fields of cannabis in the fertile Bekaa Valley, untouched by law enforcement and its attempts to crack down.”

Plus, it might hail the return of an actual economy! Sure, there are some details that would need to be ironed out about control, foreign fingers, blah, blah, blah, but I revert to my initial disclaimer. Lebanese weed may emerge from the black market as a new contender in the now official marijuana marketplace.

To read more, check out the article here: https://www.reuters.com/article/us-lebanon-economy-cannabis/lebanon-to-consider-legalizing-cannabis-growing-official-idUSKBN1K82FX

The Philippines is no stranger to economic struggle and a paucity of jobs, so this piece of news is a lovely ray of sunshine. Can you guess it? Probably not. The latest Gender Equity Report released by Seek Asia market research found that the Philippines “has the most gender balanced workplaces in terms of gender discrimination”, as reported by Good News Pilipinas. They further state that:

“In terms of management representation, the Philippines ranks among the highest with 25% equal male-female composition. Largely male management is at 38%, and another 37% with female representation in managerial levels.”

We could take a page out of this over here in Lebanon! To find out more details, check out the full article here. The Lotus Protocol is a sexual assault reporting system that uses the incredible potential of decentralized block chain technology. While they aren’t officially LAUNCHING this month, they hit the news circuit recently in Black Excellence , an online platform that puts a spotlight on black achievements and successes in the U.S and worldwide, from which the below excerpt is pulled. You should check them out, but back to the topic at hand:

“The Lotus Protocol is not associated with the legal system and users can remain anonymous when reporting assaults. It is a self-regulated system that depends on users policing themselves. It is basically a public ledger of sexual assault reports that provide an open look into assaults as they happen.Each report allows the survivor to write a description of themselves, a description of the incident, the location, the date and time, and a description of their attacker, and their intent to report it again to an authority figure or remain anonymous. These reports are secured using cryptography, making them unchangeable and immune to tampering from any third party entities.”

To read the rest of the article, click here: https://blackexcellence.com/how-texas-am-students-developed-ciaspora-worlds-first-decentralized-sexual-assault-reporting-system/

On July 21st, Daily Kos released the heart-warming story about the famous Seattle fish market owned and established by John Yokoyama in 1965: “Yokoyama’s business has been wildly successful since a rebranding helped him avoid bankruptcy in the mid-1980s. All the same, after over fifty years of twelve-hour days, the 78-year-old was ready to retire, and he wanted to keep the legend alive.So he made his managers the new owners. Ryan Reese, 40, bought the market this month with equal partners Jaison Scott, 45; Samuel Samson, 52; and Anders Miller, 42. All have worked at Pike Place for years on years; Scott’s mother also worked for Yokoyama when he was growing up.”

That’s recognizing your team, the importance of community, and that, in the end, money is worth much less than the people who keep you going every day. We could all learn from that too.

To learn a bit more, check out the full story here: https://www.dailykos.com/stories/2018/7/21/1782484/-People-over-profit-Famed-Seattle-fish-market-sold-to-longtime-employees-instead-of-highest-bidder

National Public Radio (NPR) released this story early July (you can listen to or read the whole thing here, and it really is something to celebrate. Representation in office matters (ideally) because it means greater impact on policy and other significant government actions. And arguably, no one should have more of a notable impact in the U.S than the Native Americans. NPR captures some of the unique individuals who are part of this wave of change; so make sure to check out the article. Also, watch this ‘groundbreaking political ad’ in the Lakota language, for candidate Tatewin Means, who recently lost a primary in South Dakota.

Even if the proposed bill in Ireland to ban Israeli products made in the occupied Palestinian territories does not pass, it is still something to get a bit excited about. It received overwhelming support in Irish parliament, and after all, lots of things seemed impossible in the past until they happened. The Bill passed through parliament’s upper house, and is currently advancing to the committee stage! If it goes through, it would be the first country to actually fully ban the import of goods from the occupied territories. To read more about this, check out the Independent article here: https://www.independent.co.uk/news/world/europe/ireland-ban-israel-products-occupied-palestinian-territories-seanad-dail-frances-black-a8442261.html

That’s all folks! Hope we brightened your day, and make sure to catch the second edition of our good news briefing next week. If you have an awesome positive story to share, either from the global news or your own life, make sure to let us know in the comments! We love hearing from you.