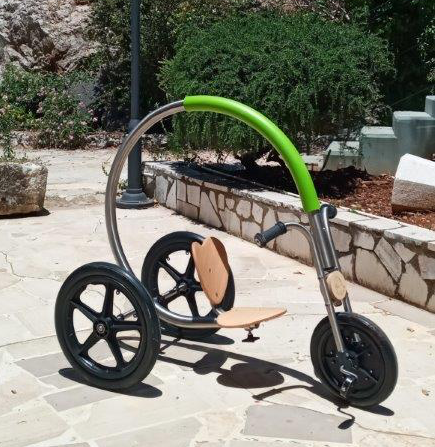 Phoenus: Fun and Innovative Outdoor Products Made in Lebanon

When I think of Lebanese made products, wine and food items or glamorous frocks immediately come to mind. But of course so many other exciting products are created in this country that are far less known internationally and not least locally. One such homegrown brand is Phoenus by Nicolas Abouchaar who produces a range of sustainable high quality outdoor leisure products. The Wellness Project recently discovered this brand’s fun and innovative creations and wanted to share their story with you.

On a quiet road in Rihaneh, a few kilometers above the seaside town of Amchit near Byblos, Nicolas works mostly alone in his workshop. He spends much of his time there assembling his skill intensive recreation vehicles and playground equipment while also designing new product prototypes. The workshop is neatly stacked with stainless steel beams, tires, and precision cut wooden spare parts dangling from the ceiling. It also houses three sophisticated machines that were tailor made by Nicolas purely for creating Phoenus products.

The first product launched by Phoenus is the Triclus in 2009. A tricycle made predominantly from stainless steel and wood, it is characterized by a very low seat position with a (wooden) back for the child to comfortably lean against and a high arched frame. These two features actually make it easy for children to peddle and go faster than most conventional tricycles. Nicolas also made a two seater Triclus (both side by side and front and back versions), so two children can ride it together – for double the fun! The Triclus is designed for children aged 3 to 10 (90 to 135 cm in height) and it can also be very easily and quickly dismantled into three parts, allowing it to comfortably fit inside car boots.

After the success of Triclus, Nicolas felt there was a void in the younger children market. He then came up with the Twiclus (by the way, don’t you just love these product names?), a pushbike (without pedals) with two wheels, which comes in two versions. One version caters to the 18 months old (going up to 4 year olds), essentially the age group learning how to master balance by pushing the feet on the ground while advancing with the bike. The Twiclus is purposely extremely lightweight at 3.5 kilograms. “It is important that the bike weight does not exceed 1/3 of the weight of the child to allow for balance control,” explains Nicolas. The second version of Twiclus is designed for the older child (4.5 to 7 years old) which weighs 5 kilograms. Nicolas also uses both inflatable rubber tires or the longer lasting Polyurethane tires for his bikes. The latter is used mainly for his bikes provided to schools and playgrounds because of the tire durability.

In addition to children bikes, Nicolas also produces a range of playground equipment, such as swings, monkey bridges, pedal-driven carousel which he penned ‘Octopus’, various types of domes (used as climbing structures) and outdoor-use play houses (named ‘Tiny Houses’), which can actually be used as a proper overnight shelter installed in your garden made from waterproof laminated wood panels. Quite a few of these products are also being made for adults explains Nicolas. “I’ve made the Octopus for friends who use it as an exercise machine where they pedal to make it go around. Also the domes have been adapted to become garden pergolas or for decorating purposes too.” There is also the Quatrus which is designed for adults (but more on that later).

Presently over two dozen schools and playgrounds throughout Lebanon stock his products, which all come with a 5 year guarantee and comply with the EN71 European toy safety regulations. “I also rent out my products and if anyone wishes to return them after their children outgrow the bikes, I am happy to buy them back. I either refurbish them or use them as rentals,” says Nicolas stressing on the importance of recycling and product sustainability.

As a child Nicolas admits to being somewhat of a bicycle and Lego geek. “I loved to ride bikes when I played outside. Otherwise, I would keep myself occupied assembling Legos and making small scale model toys out of discarded items.” This passion for constructing stayed with Nicolas who went on to study mechanical engineering at the American University of Beirut, followed by a year at the Imperial College in the United Kingdom where he received a master’s degree in industrial robotics and manufacturing automation. After his studies, Nicolas remained in the Europe continent for 12 years, working in France and later in Germany for automotive suppliers (in addition to running his own company) engineering and manufacturing climate control units. He is also the owner of several patents for the products he engineered. So how did this work lead him to eventually making bikes?

“Well, I was attending an exhibition in Germany and I got talking to a customer,” explains Nicolas. “He knew I was an industrial designer and that I loved bicycles. He asked if I could make him a bicycle with a very low step through. So I thought why not try? This commission led to what years later became Triclus.” Nicolas started to sketch his first invention while still living in Germany. In 2005 he moved back to Lebanon with his family and began the process of setting up his workshop and making his first successful prototype. In fact, the first Triclus models were being made at the NGO Arcenciel’s workshop in Taanayel where Nicolas was managing their wheelchair production for two years, in parallel to his setting up his own workshop.

It took Nicolas several years of painstaking trial and error to get the manufacturing machinery for Triclus and outsourcing other craftsmen in Lebanon (mainly for numerically controlled manufacturing not done in his workshop) and procuring high quality materials (most of which are from Europe) to produce his various leisure bikes and outdoor equipment. His bikes have already made their way to customers in Cyprus and Senegal, and he hopes to expand his manufacturing range to other countries so they can be made there and dispatched locally. Nicolas hopes to one day make his products in Germany, where the original concept of Phoenus was born. Right now, however, most of his focus is drawn to his latest invention Quatrus, which he is keen to get it onto the market.

This four-wheel leisure vehicle for adults operates more like a car than a bicycle. It has two electric motors (embedded in the wheels) and is fitted with a lithium battery. Retailing at $2000, it is mostly made from plywood and stainless steel. It needs to be charged for 3.5 hours which can last up to 30 kilometers at a speed limited to 25 km/hr. It is a low step vehicle, similar to a karting car but visually more like the Triclus in design. Here is a short video that nicely explains Quatrus and shows you how it is driven: https://www.youtube.com/watch?v=4WB36fSpxUo

Nicolas has recently managed to enter the Quatrus in a competition spearheaded by Berytech and funded by the Embassy of the Netherlands in Lebanon
https://berytech.org/berytech-e-hackathon-2020-bring-your-innovation-into-the-cleantech-sector/. The competition is a yearly three-phase program that allows Lebanese entrepreneurs in clean technology to grow their startup from an idea into a scalable business. By being shortlisted Nicolas can have access to Fab Lab, the Berytech workshop that has state-of-the-art machines which can help him make prototypes and develop the next Quatrus, the version that will also have pedals. “This next model I plan to make lets you pedal to drive a small generator in order to charge the battery and extend the vehicle driving range.” Sounds pretty smart, right? Let’s wish Nicolas the best of luck in this competition (the 25 candidates will be shortlisted in September and once again in December to become 8 finalists that partake in the last phase in 2021).

If you want to know more about Phoenus and its product range, you can go to its Facebook page https://www.facebook.com/Phoenus-257134340988913. Hope you enjoyed this story about Nicolas Abouchaar! We are always inspired by people innovating great sustainable products that are well crafted and have a low carbon footprint too! We also wish to encourage more products made in Lebanon! If you have a great story on a ‘made in Lebanon’ invention, please share it with us. We would love to know about it, and we may even feature it as one of our profile stories. Bye for now!

References:
All pictures and video links on Phoenus products where provided by Nicolas Abouchaar
The first picture (opening image) is the Triclus