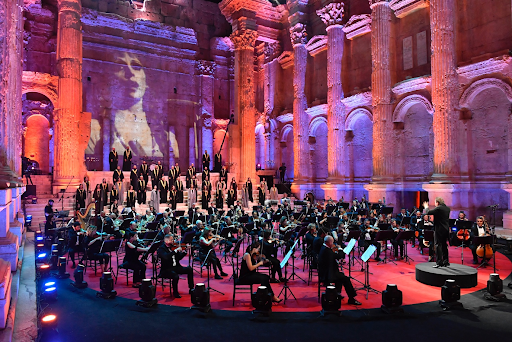 Sounds of Resilience: A Concert of Hope Amid Difficult Times

Earlier this month The Baalbeck International Festival put on a one-of-a kind performance. The hour long ‘Sound of Resilience’ concert, which had no in-person audience, was transmitted live on July 5th at 9pm for millions of viewers to watch from home. After missing the summer open air concerts of Lebanon during the pandemic, ‘Sounds of Resilience’ did not disappoint. In fact, it was pretty darn AMAZING.

Enthralling and deeply moving, the concert brilliantly encapsulated the legacy of the esteemed performing arts festival. It also paid tribute to the remarkable and prestigious cultural heritage of Lebanon, and offered a display of solidarity with a poignant defiant message: despite the financial and economic crisis ravaging the country, we will stand together and get through this. We will not stop celebrating culture and the arts, the beating heart of this nation, no matter what. At least, that was my take away after watching this breathtaking performance, and the flood of social media comments by viewers seems to echo it. If you missed it, here is a summary of this production along with some interesting titbits we thought to share with you….

The concert was a beautiful and lively assortment of well known Lebanese and international compositions, ranging from classical, rock to folk. It was led by the Lebanese Philharmonic Orchestra accompanied by the choirs from Antonine University, Notre Dame University and Qolo Atiqo, who were guided by Harout Fazlian, the concert’s conductor and artistic director. The concert also featured young Lebanese musicians who put on a riveting rock n’ roll display and the charismatic and commanding actor Rafic Ali Amhad performing a poem. A total of 191 performers (the conductors, musicians and choir members) filled the vast courtyard of Baalbeck’s majestic Bacchus Temple that faces the six remaining columns from the Temple of Jupiter. Now let me share with you the concert’s lovely music repertoire:

The show began with the Lebanese national anthem as Baalbeck’s majestic Temple of Bacchus dramatically lit up with an array of colours.

After the national anthem, the commanding piece “O Fortuna” from the cantata “Carmina Burana” by Carl Orff (a familiar tune that has been used in many films and television commercials) kicked off the concert. This was followed by Giuseppe Verdi’s romantic chorus from the opera Nabucco “Va Pensiero”. The third composition paid tribute to the Rahbani Brothers with the energetic “The Days of Fakhredine”, a symphonic suite by Ghadi and Oussama Rahbani

Next, came the music from the animated film “The Prophet” by Gabriel Yared, and actor Rafic Ali Ahmad delivering the poem “Among the Ruins” by Gibran Khalil in Arabic with lots of emotion and theatrical flair. The poetry was followed by the iconic ballet and orchestral concert work “The Rite of Spring” by Igor Stravinsky.

The following piece injected some youthful energy to the concert which was Led Zeppelin’s epic rock song “Kashmir” performed by three young men (two on guitar and one on drums) together with the Lebanese Philharmonic Orchestra. Finally, the show ended with the grandiose and fitting “Ode to Joy” from Symphony No.9 by Ludwig Van Beethoven (this song was chosen by the festival organizers as a tribute to Beethoven – this year marks the 250th anniversary of his birth).

Well, that was the concert repertoire explained in a nutshell! I also want to add that a few of these well known songs, including the poem, got a major makeover (they have been adapted), so they were given a lovely twist and a new lease of life just for this concert!

I am sure many of you are already very familiar with the International Baalbeck Festival. Premiered in 1956, it is the ‘oldest and most prestigious culture event’ in the Middle East (as stated on its website). It went onto establish itself as a unique setting for local, regional and well known international talents. It also helped some of Lebanon’s most acclaimed artists to emerge, such as the Rahbani Brothers, Fairouz, Wadi El Safi, Romeo Lahoud, Sabah and the Caracalla Dance Theatre. The iconic festival also became an inspiration and paved the way for other festivals in the Middle East.

During Sounds of Resilience, archived concert images of Baalbeck’s key performances were being projected onto the wall of the massive Roman forum, highlighting a selection of the artists and performing arts troupes that performed during the last six and a half decades, with the exception of a 23-year hiatus during and after Lebanon’s civil war years. While the list is extensive (Baalbeck had 242 performances to date), here are just some of those iconic acts: Oum Khalthoum, Placido Domingo, Joan Baez, Fairuz, Miles Davis, The Bolshoi Ballet, Sting, Wadi El Safi, Johnny Hallyday, Ella Fitzgerald, Lord of the Dance and Charles Aznavour.

When the last song (“Ode to Joy”) was being performed, the wall projections shifted to illustrations of the venue. It showed the Roman era Bacchus and Jupiter temple ruins as they appear today and compared them to (computer generated) 3D mapping images of how they would have looked then as part of a completed forum in its heyday, nearly two thousand years ago. The Baalbeck temple complex was quite something back in the day! This amazing feat of architecture is now a UNESCO World Heritage Site, too. Clearly having this grandiose setting as the performance hall was always part of the festival’s attraction.

An Act of Solidarity – Creative Forces Coming Together

Sounds of Resilience may not have had a live audience but it sure was watched by many.
The concert was broadcast live on all local TV stations, including Shahid VIP on MBC, as well as being live streamed on the festival’s Facebook page and YouTube channels. The following day it was also shown on Google MENA, and it aired again July 10th on MBC4. The festival organizers estimate around 15 million people saw the concert. Pretty impressive for a country that has under half of that number in population!

Aside from its remarkable viewership, the concert was put together in just five weeks. While the organizers did not face any major obstacles to pull it off in such a short time frame, they were extra vigilant complying with strict sanitary directions for Covid-19, both during the rehearsals taking place in Beirut and at the live concert held in Baalbeck (all the musicians sat or stood apart respecting appropriate social distancing measures).

The organizers also told The Wellness Project that this concert was done 100% pro bono. Everyone who participated, from individuals to companies (both the public and private sectors) offered their services for free. What a beautiful gesture from everyone who contributed to make this concert possible! They said the concert was ‘an act of resilience, solidarity and hope.’ They also wished ‘for the county to improve so that they can continue their cultural mission and organize events with an audience.’ Let’s hope Lebanon will overcome its current challenges, so that it can resume its role as an important thriving regional hub for arts and culture! After all, culture is the soul of a country and a vital asset which should be preserved and nurtured. This is what we certainly believe and support at The Wellness Project.

And on that note, we shall wrap up this concert story. Hope you enjoyed reading about Sounds of Resilience. If you missed it or wish to watch it again, you can catch it here:
https://www.youtube.com/watch?v=KQ0k8UE651E

Let us know what you thought of this performance as we always love to hear your comments! Bye for now.