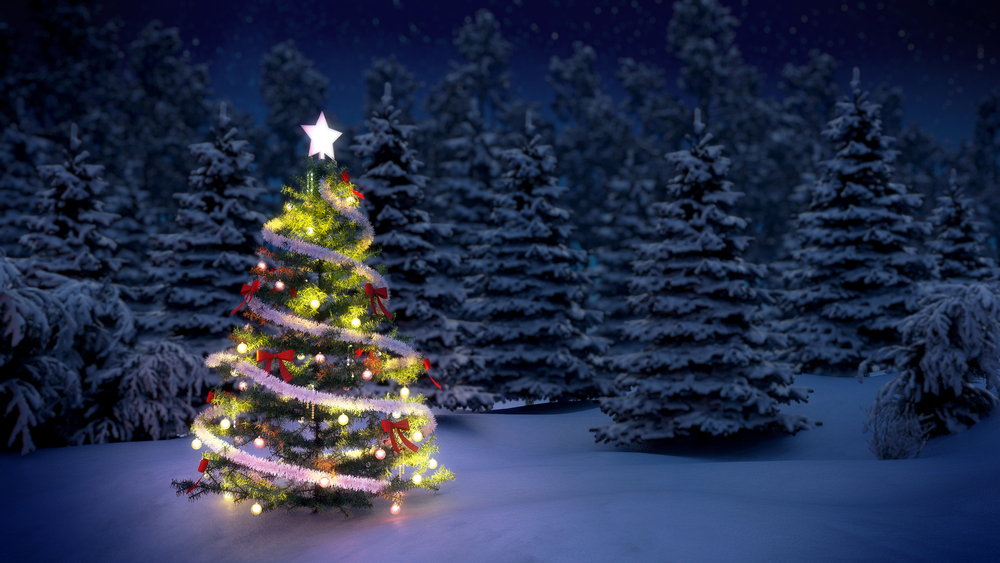 Previous item 5 Books By Middle Eastern... Next item Keeping A Journal Will...

The Story Of The Christmas Tree

Long before the advent of Christianity, there was a time when people believed that all trees and plants which had the ability to remain green through all seasons where particularly special. Ancient people would hang evergreen and spruce boughs over doors and windows for good luck. It was also believed that evergreens had the ability to protect people from witches, evil spirits, illness and even ghosts.

In the Northern Hemisphere, the longest night and shortest day falls every year on the 21st or 22nd of December, referred to as the Winter Solstice. We’ve recently told the tale of the Winter Solstice in our latest article here. Long ago, once the shortest day arrived, people believed that the sun god would finally return so that nature could once again receive the benefits of a strong, bright sun. The evergreen bough would remind people that all the green vegetation would grow once again with the sun god’s return in hope of an abundant and fruitful spring season. The worship of the return of the sun god on Winter Solstice  was celebrated by the Egyptians (sun god Ra), Romans honoured the Saturn god (Saturnalia), Celts, Germans and Scandinavian Vikings celebrated the sun god Balder (Yule)  and in Iran they celebrated Yalda, the renewal of the sun under Zoroastrianism prior to the advent of  Islam. We could go on, but I think you get the idea! The greatest symbol of Christmas as we know it is represented by the Christmas tree, with the twinkling lights and ornate, colorful decorations. The Germans were officially the ones who started the Christmas tree tradition that we are all familiar with back in the 16th century, and it was also found in Latvia and Estonia around the same period. Christians brought trees into their homes and decorated them with apples, roses, gingerbread, sweetmeats, wafers and tinsels – which were invented by the Germans, along with glass-blown ornaments. They called this tree the Paradise Tree, and it was often hung upside down while some were made of wood.

There is likewise the myth that the missionary, St. Boniface of England, was sent to Germany during this time. He found pagans that were about to sacrifice a goat (some say a child) for worshipping a sacred oak tree. Rather than make the sacrifice, St. Boniface is said to have cut down the oak tree and a spruce tree sprang out where the old oak tree stood. Of course, this is a myth, and there really is no evidence of the truth of this story.

During this time period, we see a convergence of paganism and Christianity that eventually replaced the former.  Early Christian Germans would tell the story of Adam and Eve through ‘Miracle Plays’ during the Middle Ages with the Paradise Tree adorned with apples representing  the Garden of Eden,  the apple being the symbol that unfolded the story. The early Christian calendar marked December 24th as the day of Adam and Eve.  Eventually, Christians introduced the birth of Jesus, and a baby Jesus figure was originally placed at the top of the tree and later was replaced with the star or angel. Ultimately, German settlers brought their Christmas tree tradition to the various places they emigrated to in America and Canada.

By the 18th century, candles were used to illuminate the tree, and it has been said that Martin Luther, the German Protestant, was walking home one night and looked above the forest to find the night sky beautifully lit by stars. He went home that night and lit his tree to remind him of the illuminated sky above. There are many Europeans who still decorate their Christmas trees with candles and the original glass-blown ornaments are still made by the German family that started the tradition. German tradition of tinsel decorations in a German Market

The German tradition was brought to Windsor Castle in England, where Queen Victoria and her German husband Prince Albert in the 1830s set up their beautifully decorated tree each year. The story goes that the Royal family had an illustration drawn of the “The Queen’s Christmas tree at the Windsor Castle” that was published in 1848 and then re-published in an American book two years later. Of course, the publications of the two illustrations (they modified the American version) of the Royal Family helped to popularise the Christmas tree both in the UK and the USA, although it took time in the States where it was seen as a pagan practice. By the 20th century, the Christmas tree was in full swing and with electricity in place, small light bulbs were invented.

The Rockefeller Center started the tradition of the Christmas tree as early as 1931, yet it was unadorned at the onset and eventually evolved into the giant Christmas tree with thousands of lights. There are other famous Christmas trees such as Trafalgar Square in England and in front of the White House in Washington, DC. There are other types of trees used in different places around the world and, of course, the artificial tree has circulated throughout the world. One thing that is certain, the Christmas tree, decorative ornaments and the bright lights have always warmed hearts during the festive season when family members  gather together to eat, sing, and be merry.

Here’s a fun, short video on the history of the Christmas tree:

The Wellness Project would like to wish all our readers a merry, festive Christmas with peace, joy and love in your hearts. We will leave you with a beautiful Solstice blessing to keep your spirits high and positivity in your heart!