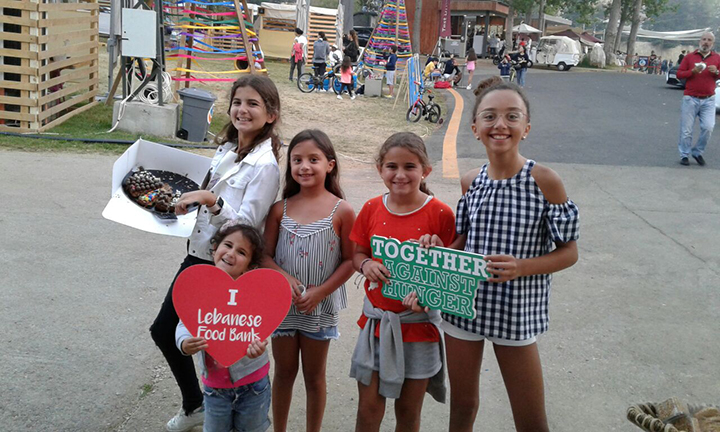 I have heard this over and over since I was a child: “there is actually enough food being produced to feed the world’s population.” If so, why do people go hungry? Of course, there is no simple answer, and a myriad of factors contribute to famine. However, according to the Global Food Banking Network, “each year billions of pounds of food go to waste in emerging economies, while 1 in 4 people are malnourished.” How unjust is that?

To alleviate hunger, at least one answer is finding smarter ways to distribute surplus food. Do you recall how many times you have been to weddings or gala dinners where so much food is still sitting on the buffet table when you leave? How about the tons of food items nearing the expiration date on the supermarket shelves? Will they be thrown away? More and more food establishments are enlisting the services of food banks, which are usually non-profit, charitable organizations dedicated to distribute left over (donated) food to those that need it most. Food banks get the food, much of which would otherwise be wasted, from restaurants, caterers, food manufacturers, markets and other sources, making it available through a network of community non-governmental organizations (NGO) and agencies.

In Lebanon the largest non-profit NGO dedicated to distributing excess food is the Lebanese Food Bank (LFB). Founded in 2012, LFB provides food to vulnerable families and individuals through selected NGOs across Lebanon everyday and around the clock. “Food waste is so rampant,” says Soha Zaiter, the Executive Manager of LFB. “It starts from the farmers all the way to the kitchens, whether in homes, hotels, catering companies or restaurants.” Farmers I ask, how so? Zaiter explains that farmers discard a lot of their fruits and vegetables that don’t look ‘pretty’. They fear people won’t buy vegetables with flaws in their appearances, so they toss them away or peel away the outer layers. In Lebanon, she gives an example with lettuce. “Farmers commonly throw away the first layers of the lettuce so it looks appealing to the customer. These outer layers are just as good and nutritious as the rest of the vegetable.” This, however, is a global problem accounting to nearly a third of all farmed vegetables and fruits never reaching supermarkets. You may often see images of unusual vegetables on social media posts: contorted carrots, heart shaped strawberries, a zucchini shaped like a human limb and so forth. Hey, I would eat those! Wouldn’t you? In fact, there is now a global effort to sell ‘unattractive’ vegetables, so they don’t end up purely for animal feed or to just rot away. For example, supermarkets across the UK are now encouraging the sale of more ugly vegetables, which you can read about right here. Anyway, let’s get back to LFB’s main scope of work: it aims to distribute leftover food that has been prepared for a large party of people (at least for 20 persons). It mainly deals directly with food establishments, such as catering companies, hotels, restaurants and bakeries around Lebanon. When a food establishment agrees to work with LFB, it must sign a protocol, explains Zaiter. “Basically this protocol takes away the responsibility from the cooked food donor and puts it onto LFB. So, once the food reaches us, we are fully responsible to make sure it is safe for consumption.”

To ensure this, the entire team at LFB takes the food safety-training course at Boecker. Each year, the teams’ certificates are renewed as well, so that each member is up to date with the food safety standards. LFB also refrains from taking certain left over food items that are deemed risky (more susceptible to bacterial contamination) or that should be consumed within a short time frame. Playing it safe, it does not accept seafood, any type of raw meat or fish, eggs, salads with dressings, and sweets with fresh cream. The cooked food is accepted only from buffets (what is left on serving trays), and LFB never takes food left from diners’ plates. Normally the food donor needs to give the food bank at least 24 hour notice. This will allow LFB enough time to brief its logistics team, prepare the tools for collection (gloves for handling food, stainless steel containers for hot food, recyclable and reusable plastic containers for cold food and boxes to put the food containers) and to inform the NGO who will be receiving the food. LBF now works regularly with many local hotels and wedding venues. It even receives a schedule of the venues’ summer events (i.e. weddings and dinner parties) by late spring, so pick up and distribution logistics can be arranged far in advance.

So once the food is collected by LFB, it is put in refrigerated vans to be transported to the NGO that has agreed to receive the food. “The NGOs we work with are equipped to store the cooked food so they are kept fresh,” says Zaiter. “From the time they receive the food they must also make sure it is consumed within 24 hours.” LFB also ensures the NGOs are always within close proximity to the food donor’s premises. “If the event happens in Beirut, we make sure the NGO is also in Beirut to minimize time to transport the food,” explains Zaiter. LFB not only signs an agreement with the food donor, but it also signs a protocol with the NGO to make sure the food is handled and distributed safely by the third party according to its terms and conditions. In addition to distributing cooked donated food, LFB also has numerous other programs to feed the needy and spread awareness on food waste in Lebanon. One of them is the food boxes initiative. With regular donations in kind from food manufacturers and supermarkets, LFB is able to prepare boxes that consist of essential food items with a long shelf life, such as rice, lentils, beans, sugar etc. “Each box can cover the needs of a family of four for at least one month,”says Zaiter. Another successful initiative is cooking fresh meals for the needy. Thanks to donations (either gifts in kind or money) hot meals are prepared – either by designated individuals in their homes or by caterers – and sent directly to NGOs on a regular basis.

LFB also frequently partners with schools and universities around Lebanon to engage the students in its awareness campaigns. “Normally one of us will give a speech about poverty and food waste in Lebanon, then explain the scope of LFB’s work,” says Zaiter. Afterwards, the students prepare food donations, and together with LFB, they go around and deliver it to the needy. “It’s a great exercise for students. It helps break taboos around poverty and marginalized people. Once the students meet the people in need, they often create a bond with them. So even when the project with us ends, the students will either keep helping the NGO or the family in need they met,” adds Zaiter. On its website LFB has to say the following about poverty in Lebanon: “28.6% of the population lives in poverty (around 20.6% live below the upper poverty line which translates into about $4 per day and around 8% are extremely poor and live below the lower poverty line estimated at $2.4 per day).” They also state in their marketing leaflet: “poverty has increased in Lebanon by around 30% between 2008 and 2016.”

For anyone who wants to help, donations in kind and money are accepted at LFB (it also welcomes volunteers throughout the year). To keep up its crucial charitable mission, the food bank is constantly fundraising and partnering with restaurants and various other food outlets. It hopes to extend its reach in Lebanon and work with more NGOs. “There are 12,000 NGOs in Lebanon, and we cater to 70 until now,” says Zaiter. “We want to expand that number and be able to serve more marginalized communities.” LFB’s vision is “to see a hunger free Lebanon by 2025.” Let’s hope this vision will become a reality!

LFB’s poverty statistics in Lebanon source: Lebanon Crisis Response Plan (LCRP) 2015/2016 produced by the government of Lebanon and the UN.