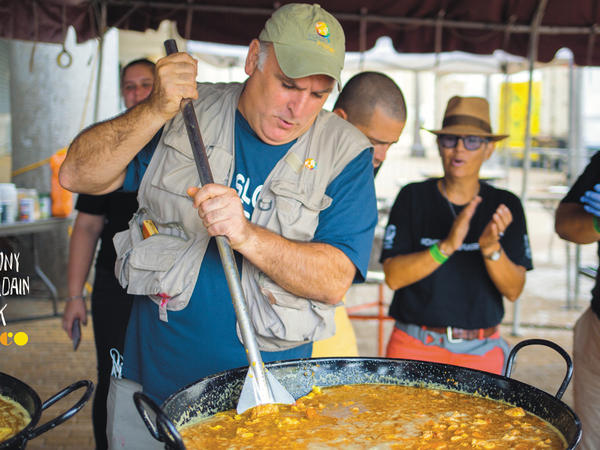 We have always faced both natural and man-induced disasters on Earth, but lately they seem to be occurring with alarming frequency. Whether it’s a hurricane, tsunami, earthquake, fire or refugees either fleeing from war zones or severe drought areas, we are regularly facing dire situations where masses of people are affected. And the rise of global warming, political conflicts and poor governance will only result in more people being impacted negatively. As disasters unfold across the world, we are (thankfully) hearing about more and more chefs and food relief organizations heroically stepping up to help out those in need.

As soon as a disaster strikes in a populated area, many survivors have no food to eat for many days. Preparing food can also be a challenge with often no electricity, water and gas in the destruction zone. Governments and aid agencies will attempt to distribute emergency supplies, such as canned food, crackers and other types of long shelf life items. Even so, getting these supplies to the needy can prove to be difficult with no power lines, limited transportation, not to mention the red tape and bureaucratic delays. Time is ticking and people need to eat – period! There is simply no time to waste. Help is required pronto!

There are thankfully various non-profit organizations that are catered to feed many people at the wake of disasters, such as Chefs for Humanity and Mercy Chefs. Of course, there are countless and nameless individuals who are either already part of the community where the disaster strikes or come in from outside and try to do everything they can to provide food as quickly as possible.

In an emergency, people are driven by an urgent empathy and put all their issues and biases aside to help those who are desperate. Helping each other in need is what makes us inherently human.  The Russian author Leo Tolstoy famously wrote, “the sole meaning of life is to serve humanity”. If the entire human population takes this meaning literally and applies it, wouldn’t our world be a very different place than it is today?

Feeding an Island in Need Sometimes, just hearing the stories of individuals making an impact can cause a ripple effect, which can inspire others who then galvanize into action and spread the goodness themselves! By the way, have you heard of Jose Andres?

About a year ago we, at the aftermath of Hurricane Maria in Puerto Rico, Jose Andres, the Spanish born US based chef who has 31 restaurants in North America and the Caribbean, left everything behind and flew to Puerto Rico . He decided that he wasn’t going to just wait for FEMA (Federal Emergency Management Agency) or the Trump Administration to do their part to help the Puerto Ricans. He managed to quickly liaise with local chefs and use local resources to cook for hungry residents. Along with his team at World Central Kitchen, a non-profit NGO he founded, he served about 3 million meals over a three-month period.

Andres and his partners addressed a need that the ‘higher powers’ – or let’s just say those in leadership positions – did not adequately handle. He took matters in his own hands and fed a bunch of people . Yes, that straightforward and that amazing! Of course, he had a large team and many locally based collaborators that he managed to liaise with effectively to achieve this feat. If you want to know more about this mind-blowing initiative in Puerto Rico, you can check out the chef’s memoir “We Fed an Island.”

While Andres gained widespread attention for his work in Puerto Rico, he has been feeding communities in need for decades alongside managing his restaurants. In June, Andres travelled to Guatemala to help feed victims of the volcanic eruption. Soon after in July, he teamed up with fellow celebrity chef Guy Fieri to feed first responders to the wildfires in California. At the more recent Hurricane Florence in North Carolina, Andres immediately got on the ground again to help feed those affected by the storm. And you can be sure to hear his name again when the next calamity strikes!

Soup for All – Soup for Syria

The idea of feeding others is deeply rooted in most societies, especially in the Middle East where charity and food come hand in hand. The Arabic hospitality extends to feeding those in need, whether it’s holding massive free ‘iftar’ meals during the Holy month of Ramadan or Churches and even non-faith based NGOs that go around organizing meals for poor and marginalized groups in their communities. In the Middle East and far beyond, soup has long been one of the most popular ways to supply nutritious food to large numbers of people. Soup is also economical because water could be added to serve more people.

Actually, the concept of the soup kitchen can be traced to the 18th century in Europe and in the United States it became popular during the Great Depression era of the 1930’s. Soup kitchens continue to exist for the homeless and struggling families all around the world, and today most serve all types of meals and not only soup. In fact, when award winning food writer, author and president of Slow Food Beirut Barbara Abdeni Massaad wanted to help the Syrian refugees in her native Lebanon, she turned to soups. About two years ago she released a humanitarian cookbook, Soup for Syria (www.soupforsyria.com), where the profits go to various Syrian refugee fund reliefs. For Massaad , the idea of the soup cookbook appealed to her personally. “Soup feeds the body and the soul, and all people can relate to its benefits all over the world,” she tells The Wellness Project.

The idea of the cookbook came to her during the Christmas holidays, a few years before the book came to fruition. She was watching the news and became deeply moved by images of Syrian refugees and their dire living conditions. It was very cold that winter, and the refugee camps in Lebanon were particularly hard hit by torrential rains and freezing weather conditions. “I decided to go and visit the refugees just to get closer to the problem with no intent of doing anything other than perhaps supporting them morally. Then, I started taking photographs and sharing their stories,” says Massaad. “The Soup for Syria project came about slowly. A good friend suggested we make soup for the refugees during the Earth Market in Hamra… then everything started to make sense,” she adds. Massaad initially created a Facebook page and put out a call for recipes. She also reached out to her contacts in the global Slow Food Movement. Eventually, the project took on a life of its own developing into a full-fledged recipe book when Massaad collaborated with a US based independent publishing house.

As well as her own recipes, Soup for Syria contains nearly 80 soup recipes donated by a number of well-known chefs. “Working on this book has changed my life. I feel so lucky to be able to use my work to do good for others. It’s the best way to reach happiness,“ says Massaad. “Make food not war. Food is an instrument to help others feed the body and spirit. It’s very valuable. We are lucky to have the talent to cook for others. I work with food because I have a very strong maternal feeling towards others. It’s the best way to show love and empathy.”

Soup for Syria is not the only food related humanitarian project for Massaad. She is also working with Sawa for Development & Aid , a local organization she trusts, in raising funds for them along with other donors. Since 2014, Sawa has been operating a Ramadan Community Kitchen in the Bekaa Valley preparing fresh Iftar meals to refugees from Syria and other community members.