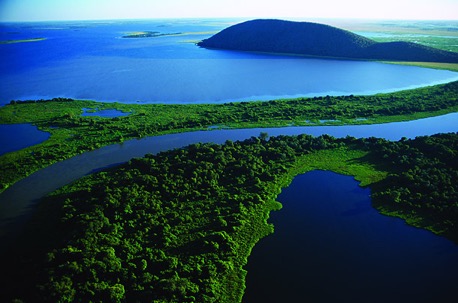 Your Fate is Tied to Earth’s Water Systems. Here’s Why.

Most people know that water covers 70% of our planet. Over 96% of that water is the salty water of our oceans, and that is the water that creates half the oxygen we breathe. It’s also the water that absorbs the carbon dioxide we generate, provides a sixth of the protein we eat, and an innumerable number of the ingredients that make up the medicines we use to fight cancer, arthritis, heart disease, and more. So let’s start there.

1- Oceans contain between 50 and 80% of all life on earth, including our oldest and strangest species, most of which still remain undiscovered by humans. In fact, it’s estimated that we’ve only explored 5% of those species, with over 91% remaining unnamed.

2- The oceans regulate our temperature and influence the weather, by absorbing 50% more carbon dioxide than our atmosphere, and transporting heat from the equator to the poles.

3- 50% of the oxygen we depend on is produced by the tiniest ocean plants: phytoplankton. These plants are the biggest biomass on earth and the base of the marine food chain.

4- The warming of the oceans means more of the carbon dioxide is dissolved in them, which makes it more acidic. This drastically alters the ocean food chain, affecting everything in it and in turn, everything we obtain from it.

Watch this beautiful clip from Blue Planet II: The Prequel, to fully dive deep into what this means:

How did that feel? Did you get goosebumps?

Okay, next: Our salty seas make up most of earth’s water, but what about what we use to drink, bathe, and sustain our agriculture? That burden falls on freshwater, which makes up only 3% of the water on our planet.

1- Two thirds of that freshwater is inaccessible, frozen in glaciers or otherwise beyond our reach. But all this freshwater is a rich habitat and ecosystem teeming with life. It’s made up of what falls from rain and becomes lakes, rivers, streams and water stored in the ground, supporting more than 100,000 species.

2- Freshwater is also one of the most endangered ecosystems in the world because of human impact. Freshwater species declined 76% between 1970 and 2010, faster than species on earth or in the sea.

3- Of the world’s 177 longest rivers, less than 70 are free of human obstructions such as dams, and since 1900, more than half of the world’s wetlands have disappeared due to development and poor management. These wetlands are the earth’s kidney’s, cleansing water of chemicals and other pollutants. As they disappear, humans and other species are put at risk.

4- Most of our freshwater, approximately 70%, is used in agriculture, with a massive proportion of this allocated to rice, cotton and sugar crops.

This clip from Planet Earth: Freshwater, will let this wash over you properly:

Want to understand more about what water shortage means for our environment? Read this:

Ready to know what you can do about the threats to our ocean and water resources overall? Check out these two recent blogs:

Need some more water-related facts? This is for you!

That’s all folks. I hope the world of water is starting to feel like your friend. It needs your help, and you are POWERFUL. Let us know what changes you’ve made in your life to protect it. Write them in the comments!