Next item How to Control Emotional...

How Too Much Sugar Affects Your Body

As we head into the holiday season, processed sugar seems to be omnipresent. Baking is abundant, savory foods are the name of the game, and many of us will indulge in sweet treats much more than during other times of the year. And rightly so – with so much going on around us every second of the day, relaxing with friends, family, and great food is a cathartic way to unwind at the end of yet another stressful year.

According to The World Health Organization, the average person should limit added processed sugars to 5% of their daily intake, which roughly equates to 25 grams. However, the truth of the matter looks a little different. According to the same source, the average person consumes 71 grams of sugar a day – almost three times the recommended amount.

It’s not new that sugar has plenty of adverse effects on the body, no matter how good it may taste, but what exactly are these effects and how can we control our cravings? Let’s dive in to find out – your body will thank you!

How Too Much Sugar Affects Your Body

It Gives You a Dopamine Rush

There’s a reason we, as humans, crave sugar more than we would a celery stick, and that reason is a chemical called dopamine.

Looking at it from an evolutionary standpoint, our scavenger ancestors were finely tuned to different foods as sources of energy and nutrition, and as such, they would notice a much-needed boost after consuming sugary foods. This was essential to their survival but, fast forward many thousands of years and our monkey brains are still hardwired to seek these foods in abundance.

When it comes to sugar, our brains are essentially just trying to fuel our bodies in the quickest way possible. So, to keep our primitive ancestors continuously eating these high-energy foods, our brains developed a reward system called the mesolimbic dopamine system. This system works so that, when you eat sugary foods, dopamine is released into your system and rewards the behavior by making you feel really, really good.

In essence, we become addicted to these dopamine hits and sugar rushes and can feel lethargic when we don’t regularly satiate the desire.

Sugar Can Rewire Your Brain

Through a process known as neuroplasticity, the brain continuously rewires itself given various stimuli and can often alter its reward system function. So, when you regularly eat sugar and get the dopamine hit, your brain will light up its reward system and, over time, adapt to this frequent stimulation.

Meaning, the more sugar you eat, the less of a rush you’ll feel every time, and you’ll crave even more sugar for a dopamine hit. Your tolerance gets higher and higher with each candy bar fix.

At the same time, the science on food addiction (which is a fairly controversial topic), seems to be out. Because food is necessary for human survival, it is debated whether you can be fully addicted to sugar and food.

With this in mind, although the same area of the brain is lit up with sugar as it is an addictive drug, the word “addiction” tends to be used rather loosely.

It Leads to More Impulsive Behavior

Stemming off my “sugar changes your brain” point, studies have also shown that too much of a regular sugar intake can inhibit the ability of a person to control their behavior.

If you’ve ever experienced a powerful sugary food craving when you weren’t physically hungry (which, let’s be real, everyone has), it’s because diets high in sugar tend to alter inhibitory neurons in the brain, which are governed by the chemical GABA. Meaning, the more sugar one eats, the less likely they’ll be able to resist temptation and stop eating sugary foods.

This is a huge reason why major diet changes are so difficult for many people. Eating sugar and not being able to control cravings is a vicious cycle.

It Can Disrupt Memory Formation

As if all those effects weren’t enough, another way that sugar affects the brain is through the hippocampus – a primary memory center. Studies have shown that people who eat diets high in sugar were less able to form short and long-term memories.

Further, it was shown that these memory changes in the hippocampus were caused by two factors – both a lessening of new neurons, as well as an increase of inflammation.

From a scientific perspective, the process of aging is quite simple. Your chromosomes are molecules that contain every part of your genetic code, and Telomeres are the structures at the end of your chromosomes that act as protective caps. These caps keep your chromosomes from deteriorating or fusing, although as you age, these Telomeres naturally shorten. In effect, this shortening of the Telomeres causes cells to age.

This process is totally normal, but some studies have shown that a long-term diet plan high in added sugar can actually shorten your Telomeres quicker than they normally do, and speed up signs of aging.

It Increases Your Chances for Type 2 Diabetes

Though it seems like a tale as old as time, studies have shown that there is a direct correlation between a high-sugar diet and an increased risk of diabetes. In fact, the global prevalence of Type 2 diabetes has more than doubled in the past 30 years alone (because of many factors – sugar is a primary one).

This is due to a few reasons, the main ones being the link between sugar and obesity, as well as its link to insulin resistance.

Essentially, when someone eats a diet high in sugar, their insulin (a hormone produced by the pancreas) spikes and regulates blood sugar levels. But when someone eats sugar in high amounts regularly, the body becomes resistant to this insulin spike, increasing the consumer’s chances of developing Type 2 diabetes and having to supply insulin themselves.

Can Result in a Fatty Liver

Studies have shown that a diet high in sugar has been regularly linked to an increased risk of fatty liver. This is because fructose, a type of sugar, is almost exclusively broken down by the liver where other types (such as glucose) are not. When in the liver, fructose is then either transformed into energy or is stored in the liver as glycogen, but when the liver hits its limit with glycogen, it then converts the excess into fat.

So, how should you go about decreasing your sugar intake?

We all know that weaning yourself off of sugar is hard, but there are some key things you can do to make the process easier. Some of these include regular exercise, drinking plenty of water, eating plenty of protein and healthy fats, having a piece of fruit when you have a craving, and knowing your emotional triggers.

Also, it’s important to remember that, unless you have a specific health condition, the goal isn’t to completely eliminate processed sugar, it’s just to consume a sustainable amount of it. There’s nothing wrong with having a treat over the holidays or having a piece of chocolate after dinner and, in fact, indulging from time to time can actually help you resist hardcore cravings when they arise.

“Everything in moderation, including moderation.”

Thanks for reading all about how processed sugar affects your body! Having sugar cravings is an experience that affects all of us, and knowing how it changes our bodies means we can make informed decisions about our diets and indulgences. Let us know your thoughts in the comments! 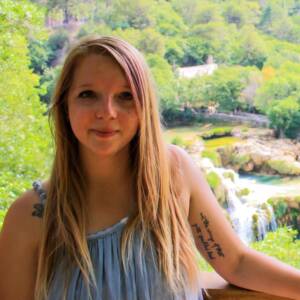 Taylor Herperger is a traveler, web designer, and freelance writer with passions in self-care, environmentalism, adventure travel, and music. Originally from the Canadian prairies, Taylor moved to Toronto in 2010 where she got her diploma in Music Business & Live Sound before going on to work full-time in music promotions and marketing. In 2017, she decided to put her music business aspirations on pause as she dove into the world of solo travel and freelance writing. Since then, she has focused on living a balanced life by spreading her time between writing, traveling, and furthering her career in marketing.

In addition to this, Taylor runs a travel blog, Taylor On A Trip, where she helps travelers discover the world through music and adventure. Follow her journey at tayloronatrip.com!