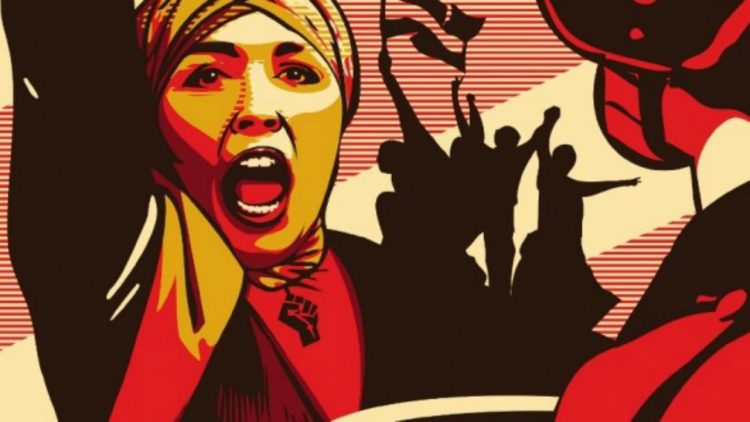 We are still riding the International Women’s Day wave  because let’s be honest, there are so many amazing women, we could make a list like this every day. But for now, we’ll just continue on from the Culture Trip blog we shared, 11 Inspirational Arab Women You Need to Know About, and give you 6 spectacular feminist figures to add to your repertoire. We also thought we would mix things up a little and honour a couple of our prolific female ancestors (Arab feminism has been around for over a century), along with some young rising stars that bring to light the intersections of race, gender and class in nuanced and radical ways. We’re going to start with the youngest, currently most internationally well-known, and arguably most controversial face on the list. Seventeen year old Ahed Tamimi is hailed as the new face of the Palestinian resistance after a confrontation with an Israeli soldier that landed her in prison and undergoing military trial. Her rage, boiling up after spending her young life under the occupation and witnessing countless injustices, was taken to the brink after her 15 year old cousin Mohammed was shot in the face by a rubber coated steel bullet at short range. The video captured of the event has gone viral, grabbing Western and diplomatic attention and causing public outcry to an unprecedented degree. This response can in part (ironically) be attributed to her image as a blonde, light-skinned, and light-eyed girl, that doesn’t fit the “othering” stereotypes the media tries to impose on Arabs. This makes the status quo dehumanization responses more difficult, and has opened the door to greater international awareness and conversation. While this recent act by Tamimi is the most publicized, she has been a part of ongoing, documented, and vocal acts of resistance to the occupation since before the age of 12. Arab women’s power has no age! Functioning in a notoriously male street art world,  Hend is the first Egyptian graffiti artist to be covered by Rolling Stone.

“Her work has a tough, extreme and honest quality to it, and there’s nothing stereotypically feminine about her aesthetics. Hend made stencils in Mogamaa and around Tahrir during sit-ins in 2011. She participated in an anti-sexual harassment campaign by spraying the stencil ‘Warning! Don’t touch or castration awaits you!’. The stencil was shocking and provocative, compelling some bystanders to even berate Hend for making it, a surefire sign that her message was powerful and effective.” This powerhouse is heralded as the first official female entry into the Palestinian political arena, through her co-founding of the Palestine Arab Women’s Congress in 1929 (PAWC). The PAWC acted in opposition to Zionist presence and was also heavily involved in advocating for prisoners held by the British authorities. Tarab was also involved in the beginnings of the renowned Arab Women’s Association, and said the following in a speech during an associated event that she organized:

“The Arab ladies ask Lord Allenby to remember and tell this to his government … The mothers, daughters, sisters of the Arab victims are gathered here to make the world witness the betrayal of the British. We want all the Arabs to remember that the British are the cause of our suffering and they should learn from the lesson.” Farah is the courageous and brilliant general coordinator of the grassroots Anti-Racism Movement (ARM)  in Lebanon. Established in 2010, ARM was started by young Lebanese female activists, including Farah, in collaboration with migrant communities and domestic workers. ARM investigates, tracks, records, reports, and shames migrant rights abuses and racism, and manages one  of the only open spaces for migrants and domestic workers in Lebanon: the Migrant Community Center in Beirut (MCC).

“ARM’s mission is to decrease racist discrimination and abuse in Lebanon on the social and institutional levels by advocating for changes in the systems that perpetuate racist exploitative practices, through sensitization, awareness raising, advocacy, and community building for more just social and institutional frameworks in Lebanon. The main focus of this work is on migrant domestic workers and to a lesser extent on all migrant workers.”

“The MCCs’ mission is to make meaningful improvements in the quality of life of migrant workers in Lebanon and their capacity to self-advocate to advance their socio-economic rights, and to contribute to a strong and powerful migrant civil society, with a focus on women as leaders of change.” An Egyptian feminist pioneer,  Huda was instrumental in organizing the Union of Educated Egyptian Women in 1914, helped facilitate the largest women’s anti-British street demonstration in  the Egyptian Revolution of 1919, and shortly after, spawned a movement of ‘unveiling’. She became the first president of the Egyptian Feminist Union in 1923, which she led until her death.  She also organized lectures for women to encourage them further into public spaces, established the Women’s Welfare Society, and later, a women’s social service organization. If that isn’t enough, Huda  wrote poetry, published a memoir, and opened a school for girls that focused teaching academic subjects rather than ‘practical skills’.

Haneen has spent over a decade working for LGBTQI visibility in Palestinian society. As Director of the Palestinian grassroots organization,  ‘Al-Qaws for Sexual & Gender Diversity in Palestinian Society’, Haneen works to provide peer support and community building in the West Bank, East Jerusalem, Haifa and Jaffa.  Al- Qaws also functions as a political platform promoting Boycott, Divestment and Sanctions against Israel within the queer community ‘…nationally and internationally, physically and virtually” (www.alqaws.org). They have called for a boycott of Gay Pride in Tel Aviv, identifying it as part of a propaganda campaign “… heavily sponsored by the Israeli government and…cynically deployed to divert attention from the occupation of Palestinian lands and the daily violation of Palestinian rights”. She further states that Israel uses this image of itself as ‘queer friendly’, to “…cover-up and maintain Israel’s ongoing system of violence and racial discrimination, enshrined in dozens of laws against indigenous Palestinians, queers and non-queers alike”.

That’s all folks. But just so you can leave extra inspired, we’ve got this beautiful compilation of Arab female power for you to watch too. Enjoy!